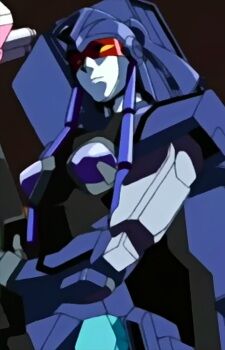 AnRyuu (闇竜), a Chasseur Super-AI robot, model number GBR-9. AnRyuu's name means "Dark Dragon" and is the latest Super-AI robot developed utilising G-Stone technology. AnRyu is KouRyuu's sister, her vehicle mode is a combat truck carrying two rows of missiles (with an impressive total of 210 missiles per shot). As opposed to her sibling KouRyuu, AnRyuu is more serious, much like HyouRyuu and FuuRyuu. By positioning her launchers above her and unfolding them AnRyu can fire her main attack; the Nightmare Hard Rain (or can be called as Shellbull Rain - シェルブールの雨) or "Cherbourg Rain", which fires a full salvo of her missiles. She also possesses an internal Projectile-X in place of the normal chest attack, which is designed to overload a target with G-Stone energy. Together with KouRyuu the pair can perform Symmetrical Docking and take the form of TenRyuuJin.

AnRyuu's main weapon, it is normally folded in half to save space but unfolds when used for "Shellbull Rain". In both modes she has access to her missile launchers but has only been seen using the "Shellbull Rain" in Robot mode.

A smaller version of the Projectile-X built into AnRyuu's chest, it barrages the enemy with G-Stone energy.

Though rarely used, AnRyuu has a large shield available to defend against attacks, it also becomes TenRyuuJin's chest piece during Symmetrical Docking.

When reaching 100% SympaRate with KouRyuu the two can dock together to form TenRyuuJin.

Like all the other GGG Robot Mobile Units, AnRyuu can perform a system change from vehicle mode to robot form and back. In her vehicle mode she takes the shape of a black missile truck.

First seen in episode 1 of GaoGaiGar FINAL, AnRyuu is partnered with KouRyuu and Renais Kerdif-Shishioh to retrieve a stolen Q-Part from BioNet. AnRyuu is ordered by Renais to open fire at part of a convoy of trucks belonging to BioNet suspected to be carrying the Q-Part. After disabling them AnRyuu reports that she could not detect the trailers of the truck, before without warning the trailers split into pieces and fly up into the Parisian skies, morphing into spiked rings. To better pursue the pieces she performs she transforms into her Robot mode and continues on foot, tracking down a group of rings near the Eiffel Tower and opening fire on them with her missiles. The rings turn and the missiles go straight through them, damaging the Eiffel Tower instead and causing one of the lifts in the lower leg to break lose and fly into the air. Running towards it she is unable to save it in time, but is saved by the timely arrival of EnRyuu, who catches the lift and saves the people.

After the rings come together to form Gimlet Avant Empereur and then Gimlet Empereur she regroups with KouRyu, EnRyuu, HyouRyuu, Volfogg and Renais to prevent Gimlet from escaping the Dividing Field and forces him to remain to fight GaoFighGar. After Guy finishes off Gimlet Empereur and the Carpenters are launched, she and KouRyuu are transferred to the 3G's Orbit Base along with Renais to stay on stand-by. AnRyuu shows great joy at the notion as she is able to spend time with her "older brothers" HyouRyuu and EnRyuu and is seen enjoying a cylinder of Robo Oil along with the other Super-AIs. 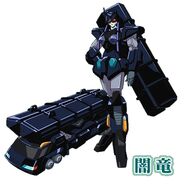 AnRyu in vehicle and robot mode.