Chuuryuu (宙龍), GGG Super-AI Unit. His name means “Air Dragon”[1]. Chuuryuu was created in China at the same time as FuuRyuu and RaiRyuu. He was originally planned to have a body similar to ShouRyuu's, and was therefore presumably intended to perform Trinity Docking with GekiRyuuJin. However, when ShouRyuu's construction was delayed, ChuuRyuu's body was cancelled, and his AI worked with Yang Long Li as a research assistant. After Jupiter began emitting powerful EM waves in 2010, ChuuRyuu (whose AI was built with EM shielding) was installed into a space probe to monitor the situation. During his mission, he was exposed to Triple Zero leaking from Jupiter; his AI was corrupted and his body was turned into a Zero Robo. Over the next few years, ChuuRyuu falsified his reports to hide the fact that the King of Ruin was slowly compressing Jupiter into a black hole. When GGG arrived at Jupiter in late 2016, ChuuRyuu infiltrated the division train and converted the CR units into Zero Robos. ChuuRyuu was killed in action when GaoGaiGo used the Molecule Plane against the Zero Robo horde. His last words to supervisor Yang revealed how Triple Zero compelled him to oppose intelligent life.

In the webnovel, ChuuRyuu creates a massive Zero Robo from the hull of the Wadatsumi. In the manga, ChuuRyuu himself merges with the Wadatsumi's hull. 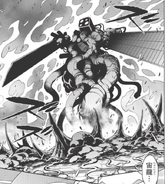