EnRyuu (炎竜), GGG Super-AI Vehicle Machine, model number GBR-3. EnRyu was one of the first mobile units created along with his brother, HyouRyuu. Like his brother, both are capable of transforming between robot and vehicle modes, and manipulate opposite elements. EnRyuu takes the form of a firetruck when transformed and has access to an extending ladder, in his robot form the crane serves multiple purposes along the rest of his equipment, consisting of a "Chest Warmer", a melting gun and a Mirror Coating Shield. The fire-based motif fits his name and personality; "EnRyuu" means "Flame Dragon" and EnRyuu has no problem acting brashly and headstrong, occasionally charging into situations without thinking, much to the chagrin of his brother. He also has a habit of failing to land properly during sorties. Even though they are twins with the same AI and the same training, the brothers have opposing personalities and sometimes argue. HyouRyuu suggests in a passing remark at one point that EnRyuu's hotness is a result of his overloading heater (to which EnRyuu retorts that HyouRyuu's cooling systems have cooled his heart as well). Despite not being able to perform System Change initially, after Mamoru boosts his G-S Ride's power to 200% EnRyuu has no more trouble changing forms.

After the initial Primeval attack, EnRyuu is retrofitted with the ability to fire Ul-Tech beams in place of heat from his handgun. When first charged with "THE POWER", EnRyuu instead fires bolts of the mysterious energy from his handgun. There is a running gag focusing on EnRyuu's inability to land correctly after aerial deployment - although he actually lands properly in vehicle mode once and later as the pilot of Liner Gao, suggesting it is his construction (or the weight of his Mirror Shield) that throws him off. He eventually gets used to it, and in FINAL he manages to save a falling elevator car while crashing. When performing Symmetrical Docking with HyouRyuu, the two forms ChouRyuuJin. When performing Cross-Symmetrical Docking with FuuRyuu, the two form GouRyuuJin.

A smaller version of the melting rifle.

When first charged with "THE POWER" EnRyuu instead fires bolts of the mysterious energy from his handgun.

EnRyu carries a shield with a Mirror Coating built into it, it becomes ChouRyuuJin's chestpiece after symmetrical docking. It allows attacks to be redirected if the shield can absorb them.

An eqiupment that fires bullets that will turn into a type of solid gel upon impact, covering the object with a layer of that solid gel. This is useful in situations like preventing a ceiling from collapsing or dropped bombs from exploding. It gains its name through its pencil-like design. The equipment is compattible for both HyouRyuu and EnRyuu.

EnRyuu's signature weapon, not only can he use it like a regular extending ladder but it serves several more roles depending on what's needed.

The first ranged weapon built into the crane, the melting rifle fires a heat beam from the end of the crane. This was later upgraded to a Ul-Tech Beam Rifle.

For close combat attacks EnRyu's ladder can detach from his shoulder and be wielded as a large tonfa, making for powerful close range attacks when working with HyouRyuu .

EnRyuu and HyouRyuu can both switch from vehicle to robot forms and back. Another effect of the System Change so far only seen in HyouRyuu and EnRyuu is the ability to transform into Semi-Vehicle Mode and keep their legs in vehicle mode, while the upper torso is free to use weapons such as the Pencil Launcher. 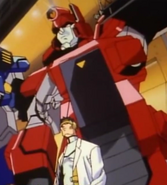