Making of a Brave Hero[]

A brave man with tremendous courage and enthusiasm, and the strength to never give up for the sake of life — even at the possible cost of his own.

Former astronaut and test pilot for the Space Development Corporation. In 2003, he had been in orbit testing an experimental space shuttle when an extraterrestrial object (later classified as EI-01) suddenly appeared in his flight path, smashing his shuttle out of the way. This left the shuttle disabled and Guy himself in a near-death state.

The alien mechanical lion, Galeon, would then appear and deal a crushing blow to EI-01, sending it out of orbit to land on Earth. Thereafter, Galeon would find the critically wounded Guy and return him to the Space Development Corporation. Adapting Galeon's technologies, his father Leo Shishioh would create a cyborg body for his son (with a G-Stone-powered mechanical heart), saving his life and giving him superhuman strength.

Though legally declared dead, Guy would join the Gutsy Geoid Guard and become the commander of its Mobile Unit. Serving alongside his old high school sweetheart Mikoto Utsugi, he would boldly stand against signs of the coming alien threat. This would bear fruit when the Zonder Robo EI-02 emerged from Garbage Island in 2005. GGG's grand counterattack prepared, he would perform Fusion with Galeon and Final Fusion with the GaoMachines to become the Super Mechanoid GaoGaiGar and destroy EI-02, beginning a long-running battle against the Zonder threat.

While operating in the field, Cyborg Guy was equipped with Ultimate Armor, derived from the ID Armor previously worn by the disbanded secret organization ID5 and equipped with scaled-down versions of several pieces of equipment designed for Genesic GaoGaiGar. When in battle, he entered E-quip mode, readying himself and placing a data-gathering lens over his right eye (the data being displayed with the shout of "Library"). On his left hand, he wore a GaoBrace that served to protect the G-Stone that provided him energy, as well as incorporating a signaling mechanism that utilized that power for calling Galeon with the Projection Beam. The rear of the GaoBrace contained a sheath for Guy's Will Knife, a G-Stone-based bladed weapon with variable sharpness (determined through the will of the user; hence the name).

In emergency situations, Guy could tap into the energy batteries (the orange canisters linked in series that fall on either side of Guy's face) to enter a golden-colored Hyper Mode—raising his fighting power to its absolute limit, though the effect could only last three minutes.

Cyborg Guy had the additional ability to operate in the vacuum of space for limited periods of time.

In this form, Guy often called himself "mankind's strongest Cyborg" (jinrui saikyō no Cyborg). Despite the bold claim, Guy's cyborg body is still somewhat less than invincible. In fact, until Mamoru Amami's restorative powers came to light, it would take time for Guy to recover from battles, and successive uses of Hell and Heaven would send him to the emergency room.

Following the battle with Zonuda at the end of the television series, Guy's cybernetic body would be thoroughly "infected" through the Matter Sublimation ability. With the aid of an unconscious Mamoru, Guy performed Purification for the first time, saving both Mikoto and himself and returning them both to human form. Guy's body, having absorbed the G-Stone previously on the GaoBrace, surpassed that of a normal human; "Evoluder Guy" was born.

As an Evoluder, Guy retains much of his superhuman strength, in addition to the ability to interface directly with computers and other machinery (this method of manipulation enables Guy to pilot PhantomGao and GaoFighGar, both of which use "Evolual Ul-Tech power"). He also had the ability to enter a green-glowing state wherein he (like Latio) was able to fly and survive in space for an indefinite period of time. Unlike Latio, it can be noted that Guy did not gain wings when in this form. When operating in the field, he uses ID Armor with properties similar to that of the Ultimate Armor used as a Cyborg. Notably, Guy used his Evoluder abilities to pilot GaoFighGar even when the latter had been destroyed far beyond any hope of repair during combat with Palparepa PLUS. This effect was accompanied by cables from GaoFighGar's cockpit wrapping around the injured Guy so that GaoFighGar continued to mirror his movements.

When Evoluder Guy draws power for one of his Evoluder abilities, the distinctive "G" symbol appears on the back of his (left) hand. This occurs when he is GaoFar and GaoFighGar (on both hands) as well as Genesic GaiGar.

In this form, Guy calls himself "the superhuman Evoluder" (chōjin Evoluder). Both the Palparepa refer to Guy (as the pilot of Genesic GaoGaiGar) as the God of Destruction.

When he became the pilot of Genesic GaoGaiGar, Guy was further altered into what the tech specs for Genesic refer to as a "Genesic server". This form, while mostly identical to his Evoluder one, also featured circuits of white that would flash along Guy's body into his eyes at regular intervals - upon a pulse of these circuits reaching his eyes, they would briefly flash with a G symbol. This was Guy's link to Genesic's systems - when Guy activated one of the Gadget Tools onboard GadgetGao a pulse would flow out of his eyes and along his body just before the tool activated. However, it also made him vulnerable to attack by Chemical Nanomachines, which flowed up along the circuits (turning them black in the process) to infect and attack Guy's body from within.

In Super Robot Wars W, it is revealed he was a former classmate of the Golion team. Krogane asks him to become the sixth member of the Golin Force, but Gai politely declines, saying that "Rokulion" (Six-Lion) doesn't have the same flair as Golion. Hiroshi mentions that characters who join a group later tend to have separate and different mecha of their own. As it turns out, The concept isn't far from the truth, as it later turns out that Golion was in fact created by the same civilization that built Galeon, the lion robot that forms the core of GaoGaiGar. 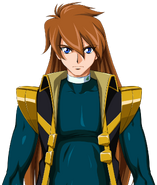 As he appeared in GaoGaiGar FINAL