GaoGaiGo (The King of Kings)

King J-Der (as a servant of Soldato J)

Ikumi Kaidou (戒道 幾巳, Kaidō Ikumi?) is one of the supporting characters in the GaoGaiGar anime series. He would later land the role of deuteragonist in the manga The King of Kings ~GaoGaiGar Vs. Betterman~.

Ikumi is the last survivor of the Arma units built to support the Soldato Division. As with all other Arma, Kaidou is a genetically altered clone of Latio (Mamoru Amami) possessing enhanced telekinetic powers. The Armas were meant to serve the same role for the Soldato Division as Mamoru Amami serves for GaoGaiGar - that is, the Purification of Zonder Cores and eventually the destruction of the complete Z-Master program. After the Red Planet was mechanized, the baby Arma was taken to Earth on the J-Ark, where he was later adopted by an elderly woman only referred to as "Mother" (actual name unknown). Ikumi Kaidou was thus raised as a normal human on Earth, only revealing his telekinetic powers to the viewers when he first deflected the attacks of EI-19, and later engaged in ranged combat with the Machine King Pizza. Due to the method in which Kaidou did so, nothing strange was noticed by the rest of the cast at this time.

When EI-01 absorbed much of Tokyo in a bid to destroy GGG and Zonderize Earth, Kaidou was blown out of a window of the exploding Tokyo Tower. He allowed this to happen due to his memory lock being opened, and in order to fake his own death so that he could go to Purify Pizza and Pinchernone (reverting them to being Soldato J-002 and Tomoro 0117, respectively). At this point, Arma began the fight against the 31 Machine Primevals, assisting Soldato J as necessary. He often clashed with Intestine Primeval, who had taken the body of his foster mother. At the end of the television series, Kaidou remained on the exploding King J-Der, having fulfilled his duty as a Warrior of Abel, without knowing that the influx of The Power would result in their being blown far outside of the known universe.

From their unique perspective, Arma and J determined that the universe was shrinking as a result of the actions of the 11 Planetary Masters of Sol. Returning to the solar system, Arma assisted Mamoru Amami in escaping the clutches of the Masters, and traveled to Earth in order to stop Repli-Mamoru from reclaiming the Pas-Q Machine. This resulted in a telekinetic battle which led to Arma's defeat - he was subsequently rescued and cared for by Hana Hatsuno. Upon returning to consciousness, Arma went to GGG just in time to stop Repli-Mamoru from betraying Guy Shishioh.

Taking the Fight to the Enemies[]

Arma then assisted GGG in their efforts to reach the Trinary Solar System, accompanying them through the Galeorea Comet. On Repli-Earth, Arma was captured by the 11 Masters and placed in the computer core of Pia Decem PIT - in the second battle with King J-Der, this connection was reconfigured such that damage to Pia Decem's Generating Armor was instead inflicted on Arma. Arma escaped this imprisonment when Pia Decem was destroyed, and helped to distract Palus Abel from the use of the Goldion Crusher.

After the battle was won, Arma was rescued and placed inside one of J-Ark's two remaining ES Missiles, to be sent back to Earth along with Mamoru. He was last seen reuniting with his mother, and later attending the

Arma's telekinetic abilities are as powerful as Intestine Primeval's black hole, and he also possesses the ability to use a variant of Purification. Palus Abel refers to him as a "bio-computer", and Pasder speaks of Arma as a "destruction machine". Arma is also capable of sending a freeze command to a J-Jewel, which can utterly neutralize its ability to output power - this command loses its effectiveness when the afflicted J-Jewel is put in close proximity to a G-Stone. Interestingly, Arma is also shown performing Hell and Heaven in the episode preview for Episode 8 of FINAL which he would one day perform with Mamoru when piloting GaoGaiGo with him.

Ikumi Kaidou's personality is very low-key and taciturn. He doesn't dare make friends because he thinks that if no one knows him, no one will mourn for him when he leaves. Mamoru firmly disagrees with him on this point, and Kaidou remains unable to forget his foster mother. As a result, Kaidou spends most of his time prior to revealing his true identity with his hands in his pockets, utterly silent. 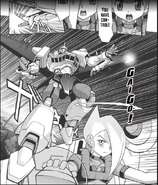 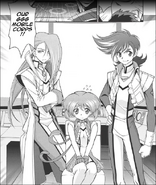