Mamoru Amami (天海 護, Amami Mamoru?) is a major supporting character in the anime series King of Braves GaoGaiGar and its direct sequel King of Braves GaoGaiGar FINAL, a light-hearted boy of alien origin, born with the name Latio (ラティオ, Ratio?) on the Green Planet of the Trinary Solar System. Later on, he would become the protagonist of the follow-up The King of Kings ~GaoGaiGar Vs. Betterman~, with ten years having passed, being a full-pledged member of the Gutsy Global Guard and one of the two pilots of GaoGaiGo, along with his genetic counterpart and rival-turned-best friend Ikumi Kaidou.

Raised and otherwise, he acts like an average child, despite his powers. On occasion, he has his adopted father's tendency to exclaim "Wa-ha!" in delight. He is very serious about his responsibilities, however - almost to an adult level. He is very much in love with classmate Hana Hatsuno (whom he refers to familiarly as "Hana-chan"), and is apparently also fairly good at the robot fighting toy game "Raji-Robo".

Fall of the Green Planet[]

Latio was born to the Green Planet's leader, Cain, and his wife. When his father discovered his natural ability to purify the out-of-control Zonder Metal which threatened to invade his world, he set to work duplicating the effect. The result of this work was the G-Stone, a power source he had hoped to utilize against the Zonders and the 31 Machine Primevals and 11 Planetary Masters of Sol. However, even though the G-Stone was reverse-engineered, and Mamoru himself genetically replicated and mass-produced by the Red Planet, the Z-Master ultimately defeated their forces, and the rest of the Trinary Solar System was mechanized and dispersed. Cain's final creation, Galeon, was repurposed and tasked with carrying his son, the last survivor, through the Galeorea Comet to the Blue Planet - Earth.

Galeon landed on Earth in 1997 near the North Pole to deliver Latio to the married couple who would become his two foster parents - Isamu and Ai Amami - who gave him the name Mamoru ("to protect") and raised him as their own son. As the child's memories were sealed in a pendant also left by Galeon (and stored away by his parents, not knowing its purpose), he was unaware of his origins or abilities as he grew.

In 2005, Mamoru at age eight "sensed" a Zonder while on Garbage Island, his hair standing on end and glowing green while doing so. Thereafter, he encountered EI-02 with his classmates. When Guy Shishioh destroyed it and retrieved its core with Hell and Heaven, he began to unthinkingly crush it. This caused Mamoru's latent abilities to awaken. He glowed green, grew wings of energy and flew over to the Zonder Core, performing Purification on it for the first time.

The Gutsy Geoid Guard, having seen this occur, began to look for "the boy with green hair." Shortly before EI-04 appeared, GGG managed to "capture" Mamoru for further study, not knowing whether he represented friend or foe. Once GGG grew to understand his nature, it would lead to him working with them on friendly terms, becoming a "special agent" (he does not have a rank, and specifically mentions it. Though, Volfogg refers to him as "lieutenant"). In doing so, he began to leave his normal life and used his powers to help others, knowing that the Zonders would threaten them.

Upon the 31 Machine Primevals' arrival on Earth, Mamoru learned that he was incapable of purifying a Primeval Core. When Koutarou Taiga visited his parents and retrieved the pendant that Galeon had given them, GGG attempted to access Galeon's databanks with Mamoru wearing the pendant in order to learn if it had any effect on him. This caused him to regain partial memory of his powers - enough to sense and purify the Primevals.

In the climactic final battle against the 31 Primevals at Jupiter, Guy and Mamoru saw Cain through Galeon's program, which had been temporarily restored through intervention of The Power. During this time, Cain restored all of Mamoru's memories of infanthood.

Guardian of the Galaxy[]

When the 31 Primevals and Zonuda were defeated, Mamoru left Earth with Galeon to return to the former site of the Trinary Solar System, in order to use the large G-Crystal Cain had left there to restore Galeon's original program, in preparation for the activation of the 11 Planetary Masters of Sol, whom Galeon was built to destroy.

Taking desperate action, Mamoru used their regeneration machine to create duplicates of himself and Galeon, and stole the machine's backbone circuit: the Pas-Q Machine. With it, he fled to Earth through the Galeoria Comet, leaving Galeon behind in the G-Crystal. Having fallen exhausted near Jupiter, Mamoru was encountered by the recently returned Ikumi Kaidou and the J-Ark, whom he begged to take the Pas-Q Machine to GGG; they were interrupted by the Master of Sol Pia Decem, who began to launch an attack against the J-Ark to retrieve it. Kaidou took the Pas-Q Machine to Earth while Soldato J-002 returned to the Trinary Solar System with Mamoru. There in the Trinary System, the J-Ark was captured and Soldato J imprisoned, leaving Mamoru with no choice but to retreat to the G-Crystal.

After the events with the replicants, GGG learned of what had occurred and followed Kaidou to the Trinary Solar System, where they faced the 11 Sol Masters. Mamoru also reappeared, rejoining GGG in the battle to take his place as counterpart to Pei La Cain, the Master of Sol made in the image of his father.

Following the defeat of the 11 Masters of Sol, Mamoru and Kaidou were returned to Earth's solar system, where they began the process of rebuilding Earth.

Mamoru Amami is slated to be one of the main characters of the upcoming GaoGaiGar project, Project Z, where he will be the Accept Mode Head Diver controlling the Neuromechanoid Kakuseijin GaiGo. The project was scrapped and later reused for the King Of Kings ~GaoGaiGar vs. Betterman~ novel. Mamoru is now a GGG member and married Hana, who gave birth to a child who they named Tsubasa.

Return of an Old Friend[]

Battle for the Universe[]

In addition to the normal telekinetic abilities possessed by people of the Green Planet, Mamoru can perfom Purification and has the ability to "adjust" damaged GS-Ride-using machines and robots, restoring their powers and repairing damaged functionality. He has also "adjusted" Cyborg Guy so that the living part of him will accept the mechanical parts, removing any threat of rejection (this process normally takes a week - Mamoru reduced it to seconds). While glowing green, he is also shielded - preventing intrusion of surrounding forces - and can extend that shielding to others if he so desires. This shielding allows him (and others) to survive in space for an indeterminate period of time. He is also capable of both atmospheric and interplanetary flight in this form. 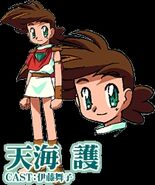 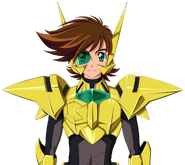 In his battle suit

Mamoru and the GGG members