GGG Super-AI robot, model number GBR-10. Intelligence robot similar in basic design to Volfogg, though he was originally incapable of combining with Gunmachines and had a more limited range of abilities. His base vehicle, a Mini Cooper, also differs greatly from Volfogg's police car.

Built to assist Renais Kerdif-Shishioh in her operations as a member of Chasseur. Though Renais herself wasn't aware of it until it was too late, his personality was modeled on that of Erik Fowler (A.K.A. "Gentleman"), Renais' murdered partner.

Destroyed in action in 2005, though Liger Shishioh managed to save his personality in backup form. Porc-Auto was later rebuilt using this backup, having a brief cameo in the second episode of King of Braves GaoGaiGar FINAL and serving as a major character in Hakaiou: GaoGaiGar vs Betterman. In his new form, he has the ability to combine with Gun Shepherd and GunHawk to form Big Porc-Auto. 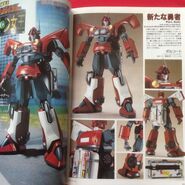 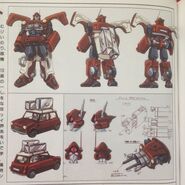 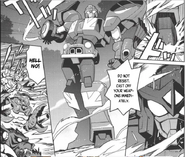