ShoRyu (翔竜), GGG Super-AI Vehicle Machine, model number GBR-5. His name means "Flying Dragon". ShoRyu was initially designed around the same time as Volfogg[1]. However, due to GGG's urgent need to develop the Goldion Hammer, his construction was delayed. He was ultimately completed sometime in 2009[2]. He, along with his sisters, was often deployed to respond to BioNet's attacks, and to perform rescue work, notably in the wake of the global communications disruption in 2010. His original body was destroyed after getting corrupted by Triple Zero, but he was rebuilt soon after.

ShoRyu possesses high speed and agility in flight, as well as the ability to manipulate magnetic fields. Originally intended to be able to combine with ChoRyuJin, ShoRyu can perform Trinity Docking with any symmetrically docked robot, forming a jetpack. The resulting combination gains improved flight speed, agility, plus ShoRyu's magnetic abilities. 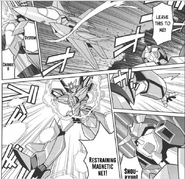