Modeled after the mole mammal, StraightGao is the "female" counterpart of SpiralGao (as per specifications), and forms the left leg of Genesic GaoGaiGar. It differentiates from SpiralGao with its straight-cone drill "nose", bearing some resemblance to DrillGao II's drills.

StraightGao suffers the second-largest amount of damage among the Genesic Machines, second only to ProtectGao - both its drill nose and rear claws (forming Genesic GaoGaiGar's claw-toes) are broken by attacks from Palparepa Prajna in its final form.

During the final chapter of The King of Kings ~GaoGaiGar Vs. Betterman~, Straight Gao was manually piloted by Hinoki Sai while its A.I. was undergoing self-repair. It was heavily damaged in battle but was stated to be possible to repair. 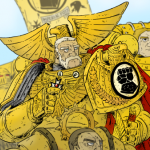