The units listed below are formed when their SympaRate is at the set target: 100%.

These formations are formed between partners that were not intended to combine with each other. Despite having compatible hardware, dedicated programs were never written. As such, these combinations can only be formed with the aid of exposure to The Power (or its precursor, Triple Zero) and their SympaRate's rising to 200%. They are simply two or more pairings exchanging partners with each other.

ShouRyuu has the ability to combine with any symmetrically docked robot; the resulting combination has the prefix "Shou-" (meaning "flying") added to its name. 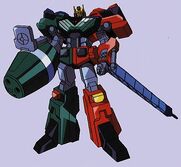