Edit
watch 01:36
We're Getting Mutants in the MCU - The Loop
Do you like this video?
Play Sound

Arm Primeval of the 31 Machine Primevals

ZX-08 is a major antagonist in King of Braves GaoGaiGar, appearing as the leader of the Magnificent Seven Primevals, the most powerful members of the 31 Machine Primevals.

One of the most known figures among the 31 Machine Primevals, Arm played the part of a "noble" warrior and was the recurring antagonist for most of the Primeval invasion of Earth. Characterized by his gigantic right arm, capable of generating powerful gravity shockwaves from its bicep - the power of this attack increased with the size of his form.

He was first seen in armored humanoid form on the Red Planet to assist in its mechanization, where he was fought to a standstill by Soldato J (002). This duel left an unresolved grudge between the two of them, one that would be suspended after J was mechanized into the Zonderian Pizza and his memory of the conflict suppressed. Arm would later face Soldato J again, in a different time and place—the GGG Orbit Base, during his assault on it as leader of the Magnificent 7 Primevals. (To assist him with this task, he also fused with the US battleship USS New Jersey as needs warranted.) As a last stand in that encounter, he would escape to Earth's Moon and perform Primeval Fusion with five of the remaining six Primevals in his group; this gambit would fail, although he managed to secure his own escape from Purification afterward, along with Intestine Primeval.

He soon reappeared in Egypt, having fused with an Egyptian pyramid (capable of scattering energy-absorbing micromachines) to form a Zonder Metal Plant, bringing Stomach Primeval to assist him and performing Primeval Fusion with him when defeat seemed inevitable. This did not prevent a second defeat (through the newly formed GouRyuJin's Burning Hurricane and GaoGaiGar's Goldion Hammer), though he managed to escape Purification a second time.

Arm's last stand would be in Jupiter's orbit with the remaining active Primevals, having fused with Jupiter's moon Europa. After being defeated yet again (by King J-Der's Ten-Linked Maser Cannons and J-Quath), he escaped yet again to fuse with Heart Primeval, where he would rip out the remaining Z Crystals from King-J-Der's chest cavity, taking his place as part of the complete Z-Master. Arm's host body was then used to spawn a massive number of Zonder Spores which were sent to Earth - Arm would ultimately meet his end with the destruction of the Z-Master. Arm's host body presumably faded from being, having been fully mechanized. 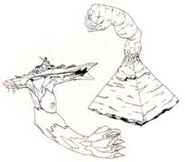 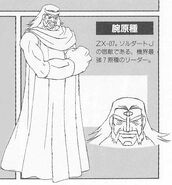 Arm fused with one of the Great Pyramids of Giza.

Arm along with the Stomach Primeval